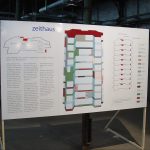 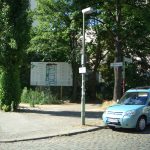 On a 2,50 x 4,50meter billboard, an utopian nine-story- building is announced to be buildt. The Appartments which are advertised, contain floor plans especially designed for the future owner. The size of each room in the appartment, is related to the time spent for the respective activity, using this area. (The size of the kitchen correlates to the amount of time spent for cooking, washing dishes etc.) these Informations are visible to the world outside, through different patterns in the facade, and window shades, of the building. Zeithaus was designed for the exhibition Non Standard Cities, which took place in automn 2004 in the Auctionhall „Alter Schlachthof“, Berlin.
In the second phase of the project, the billboard was displayed on a actual buildinglot in Berlin-Mitte.